At The End of The Rainbow 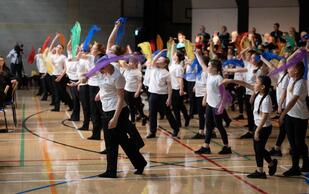 At The End of The Rainbow, a concert to thank front line staff was a spectacular moving success. A near capacity audience of some 700, with over 300 guests invited from 35 front line organisations were entertained by 250 performers from 10 performing arts organisation from in and around Maidstone.

The tone was set at the outset when all the performers stood , thanked and applauded the front line staff – the golden hearts at the end of the rainbow. This was bound to be a concert full of joy and emotion For performers  and audience alike, it was for many the first live performance for over 18  months, and was not without some apprehension.  At the end there was a long and rapturous standing ovation.

The Mayor, Cllr Fay Gooch, has summed up what many of the audience felt. Her response was “Fantastic concert, wonderful singers, terrific choreography for all the dancers from ballet to rap, lads and lassies, young people to little tots. All abilities and such amazing talent, an awesome evening, what a show case for Maidstone talent. Totally uplifting, and an inspiring evening. Hearty congratulations to everyone involved. All the intensive work behind the scenes paid off in shed loads.”

The City of Rochester Symphony Orchestra started the concert with a fanfare specially written for the occasion by Brian Rance. They contributed throughout the evening, playing their own set , supporting the Music Man Project and joining in the Grand Finale. Their set included the Wallace and Gromit March, and Cllr Martin Round, bravely and generously bid to be the conductor for a night , and took the baton for this number. Their second number, the James Bond theme also featured Dance Dynamics

Three dance troupes, the Amelia Appleby School of Performing Arts, Dance Dynamics and Hilton Hall Dance Academy, provided 3 individual sets of stunning dancing from the serenely balletic to seriously energetic street dancing. They bought colour and movement, from a wide age range of dancers, with the tiniest tots delighting the audience. The reception from the audience was super enthusiastic, and there was great contact between the performers and audience throughout the concert.

The Music Man Project is an accessible music education service for people with learning difficulties  Supported by the City of Rochester Symphony Orchestra, and by Energize and West Malling Community  Choir, their performance was a great hit, and they also played a key role in the Grand Finale.

Like A Rainbow was written by Will Todd as a reflection on the pandemic, The lyrics were uplifting and very relevant, emphasising the strength in community. It formed the first number of the Grand Finale, in which the four singing groups were joined by members of the Maidstone and Tunbridge Wells Staff Choir. The choirs and orchestra were joined by the 85 dancers who provided all the colours of the rainbow. That was followed by “Peace and Hope”, a moving piece involving both singing and signing, written for the Music Man Project, they led all the performers and the audience in the final joyful number – which resulted in a sustained standing ovation.

The Grand Finale was preceded by an appeal from Rantimi Ayodele from Maidstone and Tunbridge Wells NHS Hospital Trust  on behalf of the Maidstone and Tunbridge Wells Hospital Charity, with donations to be used to support staff welfare. Her appeal and thanks from the NHS for the support they had received, was appreciated by the audience, and reflected in their generosity. The collection at the end of the concert is still being counted but over £2000 is anticipated as a donation to charity funds.

The concert was organised by Ken Scott , Chair of the Maidstone Area Arts Partnership and delivered by Kathryn Ridgeway the Creative Director. It  was funded by Maidstone Borough Council, with a grant from the European Regional Development Fund, Welcome Back Fund. The aim of the fund was to welcome people back to live cultural events, and the concert certainly achieved that. It was however  a concert with an important purpose of its own, to express public gratitude to front line organisations for their support during the pandemic. It was a great success with both audience and performers knowing they had been part of something special.

These projects are receiving up to £50,000 of funding from the England European Regional Development Fund (ERDF) as part of the European Structural and Investment Funds Growth Programme 2014-2020. The Department for Communities and Local Government is the Managing Authority for ERDF. Established by the European Union ERDF funds help local areas stimulate their economic development by investing in projects which will support innovation, businesses, create jobs and local community regenerations.  For more information visit https://www.gov.uk/european-growth-funding